Barbecue, barbeque, BBQ or bar-b-q, It doesn't matter if you can spell it, what matters is you can smell it! 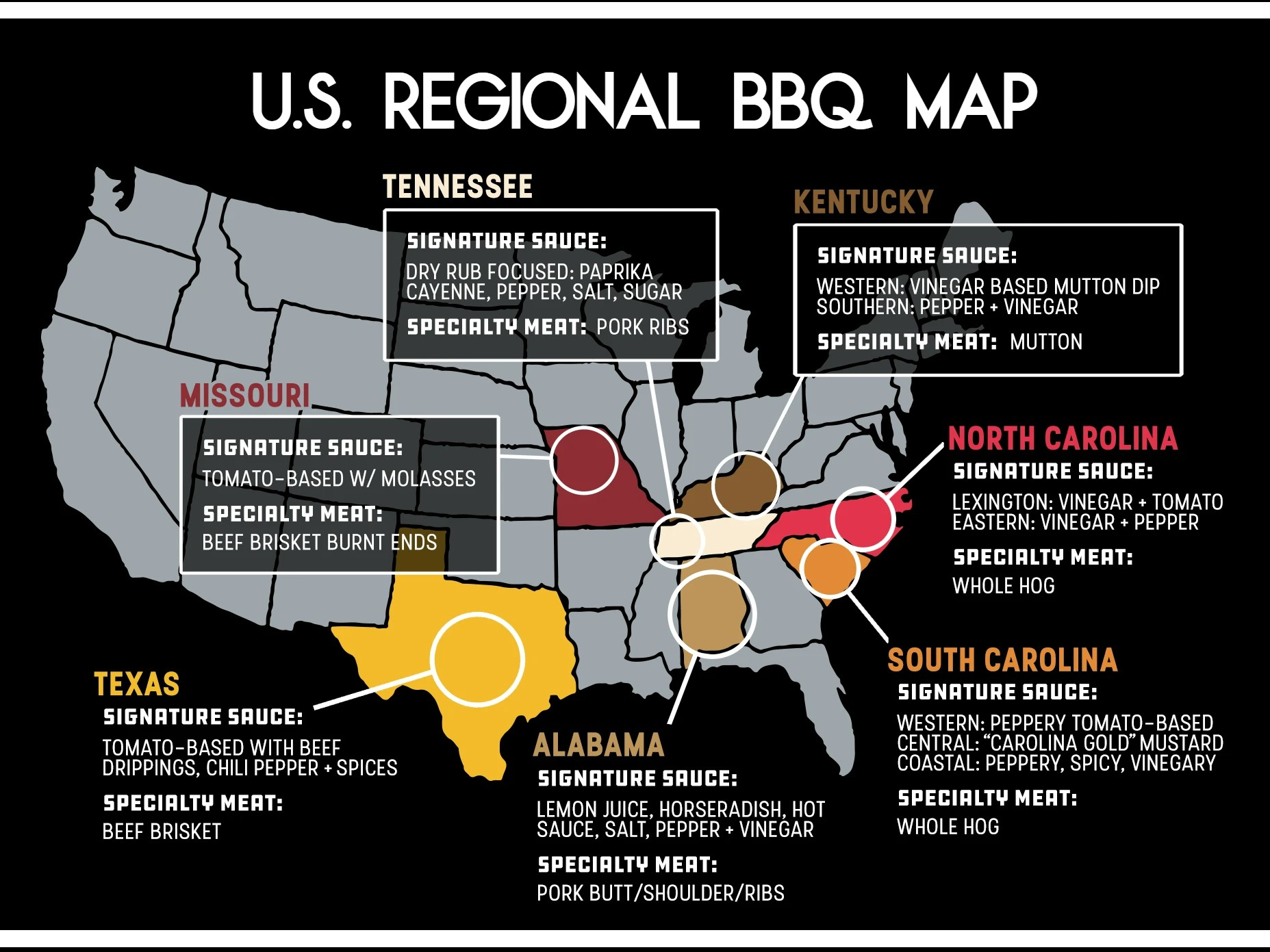 Explore the mouthwatering history of barbecue in the United States. From traditional techniques to contemporary twists, this blog post delves into the evolution of this beloved American cuisine. Discover the different regional styles that have shaped the barbecue landscape. Join us on a delicious journey through time and learn about the history of barbecue.

The history of barbecue in the United states is quite fascinating and as I did research for this, I found that like the move westward by the pioneers, barbecue moved across the country in much the same way. However, to better understand barbecue I found that I had to go back even further into history to find its true origins and found like the early Americans, barbecue is also an immigrant with a story. As with nearly all foods that we enjoy today there is always cultural significance and often tragic events that lead to the spread of these ingredients and cooking techniques. I thought I knew barbecue but like so many things I found I knew far less of the real story behind it.

The first indigenous tribes Christopher Columbus encountered on December 5, 1492, on the island he named Hispaniola (present day Haiti and the Dominican Republic) were Arawak-speaking Caribbean [1] Taíno people. They had developed a unique method for cooking meat over an indirect flame, created by using green wood to keep the food and wood from burning. Using a framework of sticks called barbakoa. Barbakoa, in their native language meaning, any raised wooden structure used to either sleep on or cure meat. The Spanish appropriated the word barbakoa and simply applied the present-day spelling barbacoa (meaning “made of sticks”) to apply to the cooking method only of a meal of roasted meat or fish. This gives us the term barbecue of which we are familiar with today. Although this technique as we know it today is credited with its creation in the Caribbean the method is now known to have been used by indigenous peoples all over the world.

As more Spanish explorers came to the Americas both north and south, they spread this cooking method throughout their travels. In 1540, close to present-day Tupelo, Mississippi, the Chickasaw tribe, in the presence of explorer Hernando de Soto, cooked a feast of pork over the barbacoa. Eventually, the technique made its way to the colonies, traveling as far north as Virginia. Unfortunately, because the word barbacoa was associated with indigenous groups, Europeans perpetuated the idea of barbecue as savage, implying that only Barbarians and lowbrow people cooked their food in this way. However, Europeans had been cooking their food for centuries over open fires on a spit or grate which we have come to know as grilling today and is often used interchangeably with barbecuing.

Coming to America. In its earliest days barbecue was comprised of whatever meats or fish that were locally available and the sauces we associate with barbecue today were not a thing. At the time a common method involved digging a hole in the ground and placing a whole animal in the pit, covering with leaves and hot coals, and cooking low and slow for many hours. Goat, lamb, and pig were the most used as they are known as foraging animals that require very little upkeep or land use to produce. Another benefit of the low and slow method allowed any animal no matter how tough or old it was to be eaten.

Beef was not used for barbecue until much later as cattle require significant land and natural resources to produce and, were a luxury afforded very few. As beef was unavailable or expensive so too were spices and not as widely available as they are today. Typically, the flavor was achieved through the smoke produced by different species of regionally available wood. The introduction of spices as a flavor enhancer for barbecue were techniques brought by the estimated 12.5 million native Africans and Afro-Caribbean people who were enslaved between the late 16th and 19th centuries in the United States and other Caribbean islands. As their homelands were the sources of exotic spices which led to their exploration and exploitation these trade routes opened and spices began to make their way into barbecue thanks entirely to the knowledge and skills of these early enslaved Americans.

Prior to the American Civil War, Southerners ate around five pounds of pork for every pound of beef they consumed.[2] Because of the effort involved to capture and cook these wild hogs, pig slaughtering became a time for celebration and the neighbors would be invited to share in the hunt and feast. In Louisiana Creole and Cajun culture, these feasts are called boucheries or "pig pickin's". The traditional Southern barbecue grew out of these gatherings and is the origin of what we know as today’s picnic. Chicken began to find its way into southern barbecue pre-civil war as chickens were the only animals enslaved Africans and Afro-Caribbean's were allowed to own. From this disparity came one of the single most iconic American dishes. Southern fried chicken.

The regional areas often referred to as the “Bible Belt” is where the more familiar and modern concept of the barbecue has its origins as barbecue and Sunday get togethers after church were a natural fit. Neighbors coming together with similar cultural, religious, racial and socio-economic statuses helped to create communities of like individuals. And, where there are people there are opportunities and the barbecue featured at church picnics became an opportunity for enterprising politicians to hold rallies. As it was a popular and relatively inexpensive way to lobby for votes, the organizers would provide barbecue, lemonade, and usually a bit of whiskey on the down low. Rumor has it that this is where the whiskey sour and Lynchburg Lemonade were invented.

Another important part of the community was juke joints which catered to the rural work force that began to emerge after the emancipation. These informal gathering spots began to spring up in private homes and abandoned buildings at rural crossroads in the southeastern United States and were primarily operated by African Americans as a place to socialize since they were barred from most white establishments by Jim Crow laws. Juke joints featured music, dancing, gambling, libations and of course barbecue. There is no arguing that as a cultural phenomenon barbecue is for many not just food but a deeper part of their cultural identity.

Much like present day, the type of meat and spices that were used for barbecue became symbolic both economically and geographically, with the latter becoming a source of intense regional pride that is without a doubt stronger than ever.

The great migrations of black and white Southerners transformed America. Between 1900 and 1980 more than 20 million southerners left looking for jobs in the cities, suburbs, and farms of the North towards Chicago, west to California, and everywhere in between taking their distinct regional styles with them.

Today there are seven primary regions often referred to as part of the BBQ Belt. These include North and South Carolina, Kentucky, Alabama, Missouri's Kansas City and Tennessee's Memphis area and Texas. Each of these distinctly different regions are highly influenced by adaptations that were made to their original styles by colonists and immigrants from all parts of the world. An example of the evolutions of these styles are the additions of mustard and vinegar style sauces from German and French immigrants. Additionally, areas that had access to trade routes such as those located near port cities or on rivers were more likely to develop styles using molasses, sugar, and a greater variety of spices due to their availability. To further convolute things there are different styles within styles in these regions with each professing to have the secret recipe for the “world’s best barbecue,” and to disagree would be foolish.

There’s no doubt that barbecue is one of the most popular types of food in the U.S. today and has undergone a type of modernization in urban areas thanks in part to the rise in television shows such as Throwdown with Bobby Flay, BBQ Pitmasters and BBQ Pit Wars. This, combined with the ease and availability of newer and easier smoking methods that can be used with propane, pellets, and electricity, rather than getting up in the wee hours of the morning to build a fire have helped propel its popularity. Although traditionalists in the BBQ Belt have always known the virtues of the barbecue and most continue with their tried-and-true methods passed down from one generation to the next, I’ve heard from a few that its roots and traditions are being lost.

As Americans have become more transient, additional barbecue regions have made their way into the backyards of grill masters across the U.S. Although not part of the BBQ Belt, Hawaii and the Pacific Northwest should be recognized as equally unique and delicious, and their indigenous peoples should be recognized for their contribution to the barbecue and smoking legacies.

Luckily, we have put together many BBQ rubs and seasoning blends based on some of the most common regional BBQ styles. Additionally, we have all the spices needed to go free style for your secret recipe for the “world’s best barbecue.” 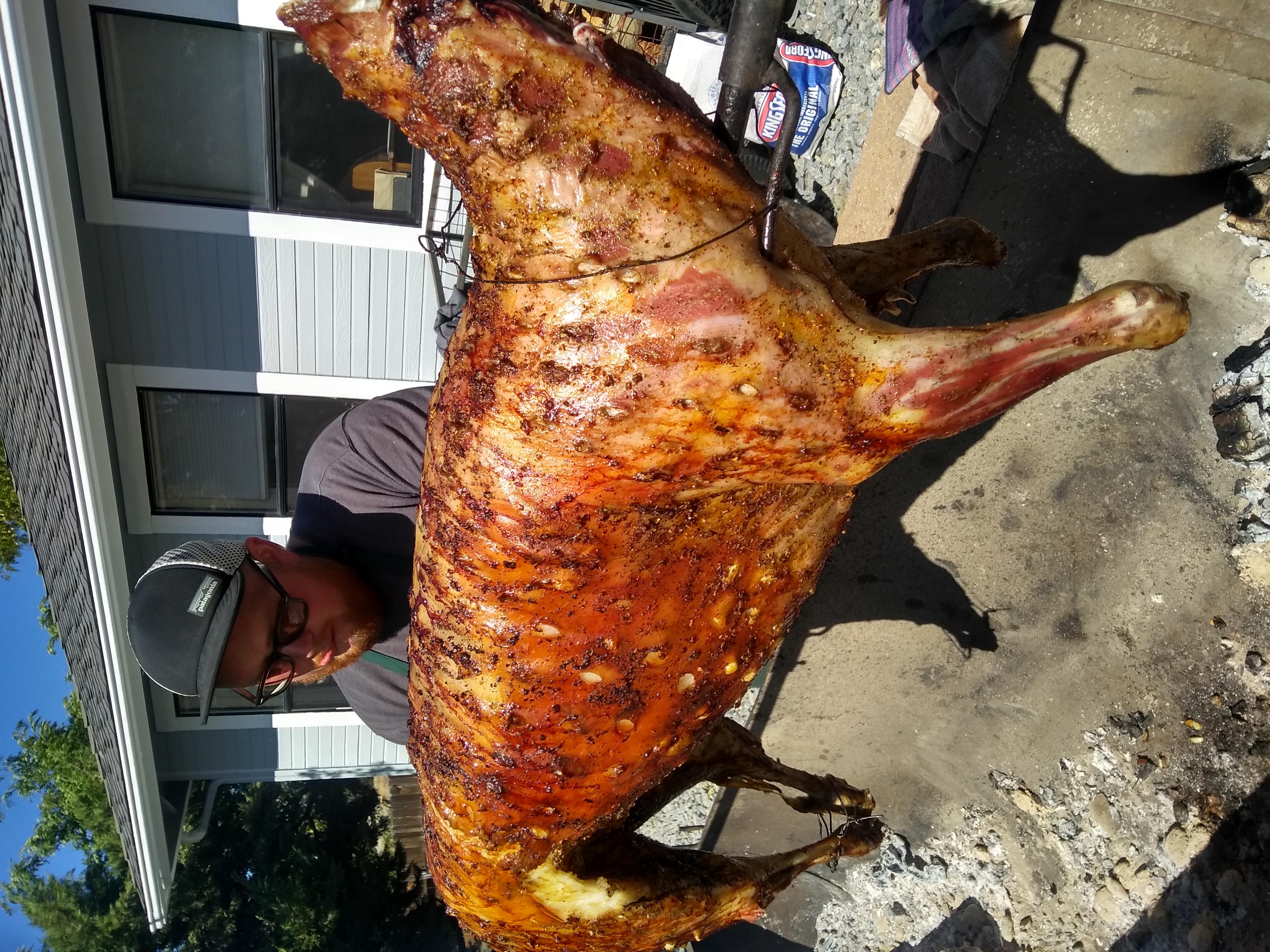 Our son roasting a full lamb on a spit for their engagment party.

Basque style - stuffed with garlic cloves and rubbed liberally with our Lamb Rub.

[1] The Evolution of American Barbecue

[2] Eating, drinking, and visiting in the South: an informal history.